A photonic integrated technology company known as ColorChip recently released an innovative, compact, lens system for AR/VR smart glasses that utilizes Pico Projector technology. This new lens platform is in anticipation for the potential upswing in the AR/VR market, particularly if Apple releases their version of SmartGlasses at the end of the year.

This RGB Pico-Projector gives the smart glasses lens a highly efficient display with low power consumption. Because of the way ColorChip embedded the RGB beam combiner ( an arrangement of splitters and mirrors to disperse and combine light) in the glass, the need for expensive and complex housing for the projector is no longer necessary. You can see how the projection unit fits snuggle on the arm of the glasses.

The fact that a pico projector based system has gotten this advanced is remarkable. This Smart Lens platform made by ColorChip is crucial in the advancement of projection technology. The ability to make a compact unit that has low power consumption and is able to have an efficient display will hopefully influence big companies in the micro and pico projectors market to make smaller more compact projectors.

The AAXA P7 Mini HD Projector fits snuggly in your had and is one of the smallest 1080p projectors that we have seen. The P7 does a wonderful job at displaying small complex designs and can function as a media player for your videos, photos, and music. It is remarkable how portable this projector is. A downside is that compared to some of AAXA’s other pico projectors, the P7 is not as bright which makes some video quality only okay.

The AAXA P7’s body is a sleek black and gray, and measures 2.7 x 4.7 x 4.4 inches and weighs an incredible 1.4lbs. Like AAXA’s other projectors the P7 is a DLP projector that uses LEDs as its light source. The LED’s lamp life is rated at 30,0000 hours which is impressive for an LED. The AAXA P7 has a 600-lumen output when it is plugged into its AC adapter and 450 lumens when it is going portable. According to AAXA, the battery should last 90 minutes on a charge.

Unlike others on the market, the AAXA P7 is a true 1080p projector. There are many 1080p projectors on the market but many don’t have a true 1,920 by 1,080 pixel (1080p) resolution. This little projector does and proves it. The biggest and best advantage is really the portability of this projector. The size lets you take it into any meeting, small church, school presentation, or even a movie night without much hassle or setup. It really is plug and play.

On the front of the P7, the lens is positioned in the upper left-hand corner. On the back of the body, you will find an HDMI port, an Infrared Receiver for the remote, and a USB Type-A port to put your media via flash drive. The projector’s right side comes with the power adapter plug, a VGA adapter port, and a slot for a Micro-SD card. On top is a small panel cluster that acts as a manual control.

When testing the image quality of the P7 mini projector I noticed a slight degrade in image quality with the introducing another light source, in this case, the screen size had to be shrunk to get the image back to normal. I tested both data- and video-image quality over an HDMI connection. Looking at the text quality on score there were no issues with both black and white. The colors themself are rich and realistic looking.

Even though the P7 shined a little less bright than other pico projectors, and there were hiccups in the image quality, this is a great buy for only $399. The portability and its true native resolution make it a true steal. It would be great for the traveling businessman and does a pretty good job of showing movies and playing music.

When getting ready for a business meeting or trying to have a theatre night with your family, the projector that you use can make or break the event. The issue in the past with projectors was not only the brightness, but the sheer size of a projector was large enough to take up the back seat in most vehicles. The answer to this was to make a compact projector also known as a pico or mini projector. Some notable pico projector companies on the market currently are AAXA, Sony, Optoma, Epson, Vava and the main subject of today’s topic, Philips.

The Philips PicoPix Max is a 1080p supported Full HD pico projector that features Android Os, an invisible top touchpad Wi-Fi, and Bluetooth and USB-C connectivity to mirror your apps. I must admit I think that it is really cool that micro projector companies are starting to make the move to incorporating USB-C. Out of the box, the Pico Projector comes with a travel pouch, a power adapter, a remote control, stand, and the projector itself. In terms of the design and features of this mini projector, I have them listed below.

In terms of the overall user experience, this pico projector‘s software, possibly due to its application design, and maybe the processing hardware, feels quite slow. For example, when adding the device to your wifi, the selection of access points keeps changing despite your wishes. When viewing the picture, the 1080p HD works smoothly, but the video in 4k lags at points. In comparison to the BenQ 4k projector, and AAXA’s 4k1 projector the latency issues caused some headaches. The positives of this are that the 1080p is crisp, it is very user-friendly, and the portability of this product is really top-notch. If you are trying to find an extremely affordable option for a solidly built projector, the PicoPix Max isn’t that bad of an option for only $549. However, if you want a projector whose picture resolution lives up to its description, it is ok to spend the extra on brands like BenQ, AAXA, Optoma, and Sony.

The constant evolution of projectors has caused a race to focus on image quality and brightness to deliver the clearest image. The projector market and even the pico projector market have projectors that have resolution support up to 4k. When it comes to whether to pick a laser projector or a LED projector the question becomes a bit skewed for the untrained consumer.

In 2020, a time when cars have become electric and the bulky projectors you remember from grade school have been turned into micro projectors big enough to fit in your pocket. The AV industry is still choosing LED projectors over flat panels. You may ask yourself why is this? Shouldn’t flat panel displays be just as technologically advanced as the newest projectors? One answer to this question is simply the statement that sometimes size does matter.

While the graphics on flat-panel screens are impressive, that does not matter when you factor in size screen. When it comes to applications that require text and numbers to be displayed on-screen, screen size is the most important factor. Yes, I understand that there are currently TVs that support 8k picture quality. But something to take into consideration is that a good chunk of LED projectors and even pico projectors the size of your hand supports a picture resolution up to 4k. Companies like Acer, AAXA, Optoma, and others have created a product line of mini projectors that can not only cover a wall with an image or video enough to comfortably give a classroom of students optimal viewing but have also achieved a high lumen output in such a compact electronic.

Another factor that these projects particularly micro projectors have over traditional flat panel displays are there portable design. We all remember the days in school when the class would get a substitute and the poor guy or gal would have to roll in a zenith on a cart with broken wheels to play an episode of Bill Nye the Science Guy. With pico projectors, AV professionals and teachers alike are able to carry a projector that can display a 200″ picture for there students that is the size of there hand. The AV professionals have it right with using LED and Laser projectors for a bigger screen. One day both standard and micro projectors will catch up to the picture quality of TV and maybe then the rest of the world will follow the advice of the AV professional.

If you’re budget sensitive and really want a mobile pico projector, the latest Miniview LED projector from Chinavasion may be a fit. The main features that it boasts is having a variety of input connections and its mobility. 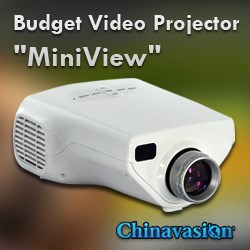 The MiniView does not have batteries and does requires a power cord to plugged in to work. Shinning with a 55 ASNI Lumens this project has a price tag of $69.91.

While this may not be the brightest in the bunch it has been doing surprisingly well in the market. One of its key features to talk about is the coaxial input allowing the user to connect their cable or satellite feeds directly into the projector.

So the question you have to ask yourself is if the MiniView’s functionality and low price outweigh a competitor’s brighter display, higher price, and in some cases better mobility (battery powered)?

Researchers at Carnegie Mellon University say they’re working on a solution that could make raindrops nearly invisible while lighting the road in front of you.

Carnegie’s researchers came up with a possible solution involves a camera, a digital light processing (DLP) projector, and a reflecting mirror, alongwith a computer to control the whole setup. As rain falls, the camera can detect individual raindrops and predict their velocity and trajectory. It sends that information to the projector, which projects a small black dot over each rain drop’s location. The result, researchers hope, is the ability to light in front of the car but not the raindrops, which would result in the most light output without returned glare.

As expected, it’s very difficult to detect individual raindrops and light around them. The system takes about 13 milliseconds to find raindrops and respond accordingly, so the top portion of the light beam would still hit the raindrops like a standard headlight. As it stands today, the system also works best at a speed of about 19 mph, where it’s 68.9 percent accurate at blacking out raindrops while still keeping over 95 percent light throughput. Drive faster and the system steadily loses accuracy. As you can see, it still is a ways off from mainstream implementation.

As we always say with futuristic tech like this, it’s going to be many years until we see something commercially viable that works like this. The system will need some big strides in digital light processing projector technology to work better,

Still, the idea of going from halogen bulbs to xenon to LED to DLP projector headlights is intriguing, and having two DLP projectors and two wide-angle cameras mounted to the front of your car would open up a whole new world of active headlights that could shift to avoid blinding oncoming traffic or pedestrians.

Who knows, maybe eventually we can project movies from those headlights. 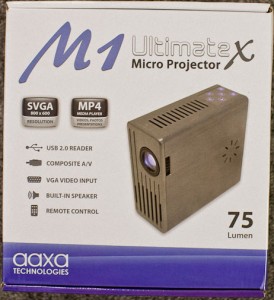 AAXA Technologies has released the M1 Ultimate-X led projector. The only difference between the Ultimate and Ultimate-X is that the Ultimate-X features a 2GB SD Card instead of 1GB onboard memory. The reason AAXA has choosen to go this route is to further increase the stability of the onboard operating system.

For those unfamiliar with the M1 Ultimate here are some specs:


Also, up till May 31st, use coupon code MEMD2011TB to receive free shipping+free cable of choice. 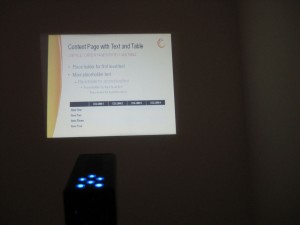 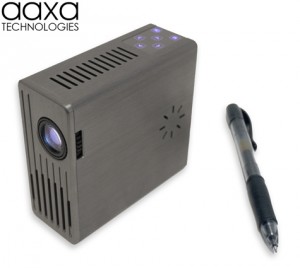