Innoio is a projector company that is most known for their popular product, the Innocube.  Recently the company announced that they would be releasing a new version of the Innocube called the “Art”.  The new unit basically is the regular Innocube but in a tougher colorful casing that resembles a Rubix cube. 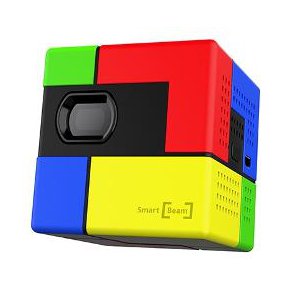 As far as aesthetics go we think that the Innocube is on the top end.  The unit’s are sleek, simple, and just look good in general.  Their small package is impressive as is their performance considering it can fit in the palm of your hand.  However, looks are not everything and just like every other product out there the Innocube has it’s share of issues that should be noted before making a purchasing decision.

The first thing we’d like to mention is the brightness, for the size of the unit it seems totally appropriate but any way you spin it 40 lumens just isn’t a lot.  The unit would definitely need to be used in dim to very dark conditions for it to produce a usable image.  The native resolution leaves a bit to be desired as well.  Running at 640×480 it has a resolution similar to a common television from the early 2000’s, especially when there are picos out there with a native resolution of 1920×1080.  However again for it’s size its understandable and for many who just want a quick way to watch a movie on a wall while camping or just while a TV isn’t available its still completely usable. 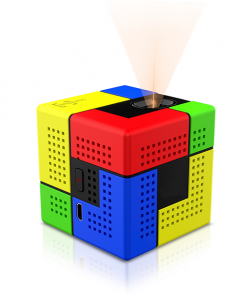 The unique shape of the projector also helps as it can be easily rotated to any position needed for comfortable use.  Such as pictured above, it can easily be set on its back and used for ceiling projection.  The unit also includes a special tripod that can hold the cube shaped unit for even more precise positioning. 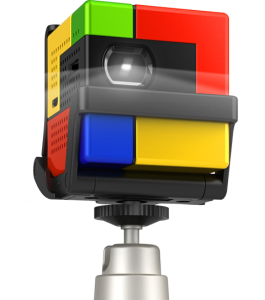 As far as connectivity goes the projector is very compatible but does use proprietary connections for most of it’s video output which can make it more of a hassle to connect certain devices.  The ports are all located on the side of the unit as to not interfere with positioning as is the focus wheel for easy operation without having to pick up the unit.

Lastly, the price, we honestly think that for a unit with these specs the price is just too high for a unit like this.  Yes it looks cool and is very functional, it’s just that you can get a unit with far better specifications for the same price than you can one of these.  The Innocube currently retails at $299 which for some may be worth it however for us we just can’t justify the price.

Check out this video from Innoio’s website showcasing some of the uses of the Innocube: