AIPTEK, a small electronics company that generally produces pico projectors has recently released a new product that is out of the norm for their business, a tablet projector called the P70.

This is an interesting development in AIPTEK’s product line as previously they were known for cases for phones that included small projectors or also standalone pico projectors.  The company has not previously developed a tablet or a device with a fully integrated pico projector yet but honestly the P70 seems like a good start.

The built in projector is a DLP unit capable of 50 lumens and a resolution of 854×480 which are almost the same specs available in the Lenovo Yoga Tablet Pro 2 and is accomplished im a much smaller package.

The actual P70 tablet has a 7″ capacitive touch screen running at a resolution of 1024×600 which isn’t the highest we’ve seen on a 7″ tablet, for instance the popular Nexus 7 runs at 1920×1200.  It also sports a Quad Core cpu, 16GB of internal storage, and a 5mp rear camera making this device straight average with other tablets in its size and price class. 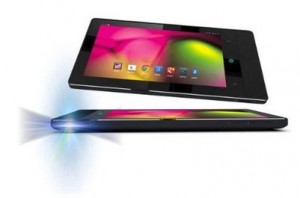 Right now the P70 is so new that there aren’t very many reviews out on it and we haven’t even been able to get our hands on one to test as they’ve been out of stock since launch on Amazon.

If you’re interested in a tablet and are also looking at pico projectors or some way to share your tablets screen then the P70 is definiately a great and economical option to the Lenovo Yoga Tablet Pro 2.

We’ll be covering more on this device as more information comes out on it and hopefully we can get our hands on one so that we can do an in-depth review.