We love checking out websites like kick-starter and indie-gogo because it’s a great opportunity to find some interesting projector concepts that keep reminding us how many possibilities there are for integrating pico projectors into every-day products.  One of the products we recently saw impressed us, and it’s name is SIO. 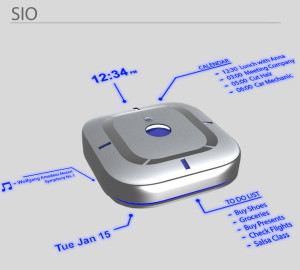 SIO is a replacement for your wall clock, but it does so much more, like the other smart products we’ve been seeing come out of the woodwork SIO is supposed to take an everyday object, a clock, and basically add a processor that allows that object to process data and therefor have many more functions than it originally did.  Objects like this are being dubbed “Smart” and a few of them are already on the market, such as the smart-phone, the Nest smart-thermostat, and even smart-televisions to give a few examples.

The SIO is about the same size as an ordinary wall clock, and mounts the same way however instead of having hands like a clock it has small LED projectors integrated into the 4 sides of it.  These projectors are very low grade to reduce the cost and can only project text, and in 4 different colors, Red, Green, Blue, and Purple however what they display is really cool. 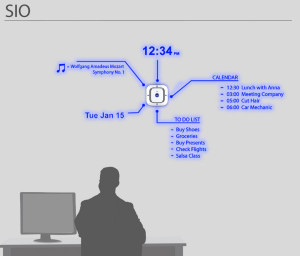 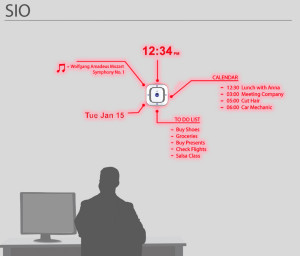 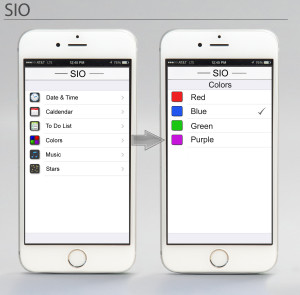 It can also link to your smart-phone or computer via WIFI or Bluetooth connection and gathers data from an app installed on either device.  The SIO app gathers information from your phone or computers calendar, e-mail client/texting app, clock, to-do list, and even what is currently playing on your music app, it then tramsits this data to the SIO via wireless connection and the SIO projects this information around it in circular fashion on the wall.  The SIO app is planned to be available on all major smartphone operating systems including Windows Phone, Android, and IOS. 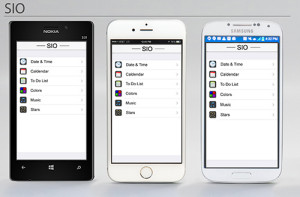 The SIO also has a “Star” projection mode however we are not entirely sure what this does.  In the diagrams it shows that there is a camera located on the body that is used for “Star projection” however there is no mention of what this actually is.  It is also shown in the picture of the app, which leads us to believe that it is some sort of a mode it can enter.  Our gut tells us that this is basically a light sensing camera that can tell when the room becomes dark and then tells the SIO to start projection dots or images of stars on the wall, although we cannot fully confirm this until we have more information. 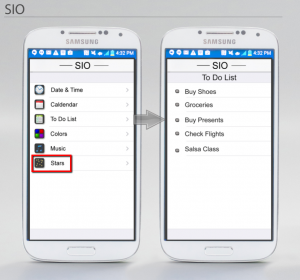 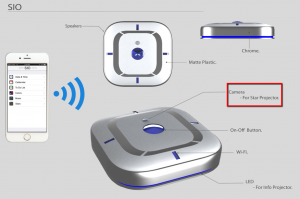 Although there is a brief mention of speakers in the diagram we had originally thought that these may be small speakers to produce beeps or some sort of confirmation noise when the SIO received a command however recently it has come out that these will actually be high quality speakers that are capable of playing music at least at a decent quality, when set up with your music app the SIO will also act as a wall mounted blue-tooth speaker that can be transmitted to from anywhere in the room.  The SIO is also smart enough to jump to another smart phone that has previously paired to it in the event that it loses connection to its current device.  This allows people who want to use it in their home or office where there are multiple people can do so by simply enabling/disabling bluetooth.

That being said we’re really excited about this product, it is said on their indie-gogo page that the first prototypes will be appearing sometime within the next 3 months as well as the app so perhaps a hands-on review of this product is not far off, we hope not anyways.  The SIO should retail somewhere in the area of $150-$200 CAD which we think is a totally reasonable price for a product of this caliber.  There are definitely still questions that we have about the SIO such as how it can charge or if it even has a battery but we’re sure that we’ll be getting more information soon as the prototype nears completion.

Check out the SIO on Indie-gogo for yourself and if you think it’s a cool product you should consider donating.  Donations to products like these are often the difference between them existing and not existing: https://www.indiegogo.com/projects/sio-your-led-projector-agenda