We get most if not all of our projector news from people that we follow on twitter and recently we came across something very interesting. 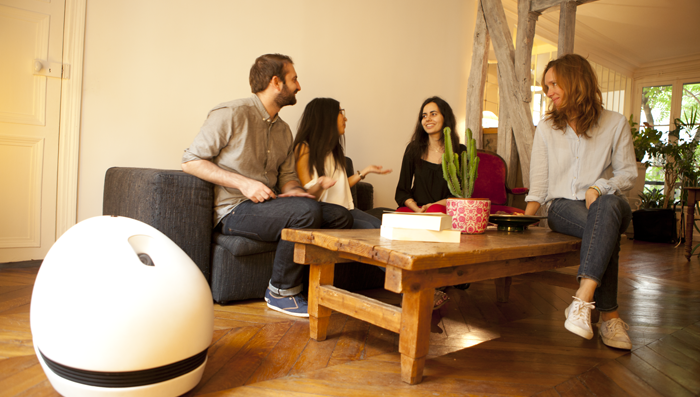 This is Keecker, noted as being the worlds first “Homepod”.  We had never heard of a “Homepod” before and were intrigued, what we found was definitely surprising, but we’re just not sure HOW useful it will be.  Keecker is shaped like an egg, it’s fairly large (About 2 feet tall and 3 feet around), and has wheels on the bottom that allow it to move.  It sports a 1000 lumen LED projector, 3D surround sound, a high res camera, a 1TB storage drive, air quality sensors, WIFI, and runs Android 4.3.  It can move around on it’s own similar to a Roomba and can drive to any room in your home via a command from your smart phone (given that it’s on the same floor), it also has a charging station that it can drive to to charge it’s self.

Keecker has a unique motor that can control the angle of the projection that it emits,  this allows it to project anywhere from low parts of the wall up to the ceiling.  It can project as close as 2 feet and automatically adjusts it’s keystone and its focus.

With all of it’s built in sensors and camera it is also a good home automation/security device.  Although it has not been confirmed yet, there are apps available to android that allow for motion detection from cameras and also to communicate with a nest and change temperature etc.  Apps like this could automatically automate your home and control things like your thermostat, lighting, and even watch out for home invasion.

The Keecker definitely has a lot of functions and can be a useful device in certain situations, but now for the bad stuff.

Even though it is literally the most mobile projector in the world, its still very immobile in many senses.  It’s slow moving and must use sensors to look for walls and other obstacles, this can create a fairly long travel time to where you need to use it.  Also for any building that has a set of stairs, the unit will need to be physically picked up and moved up or down the stairs.  The unit clocks in at 25 lbs and can’t really be considered light, for some people this could actually be a problem especially if they would like to use it in an upstairs meeting room or perhaps in an upstairs bathroom.  Right now the most mobility the unit has is to dodge people and objects in it’s way while it’s travelling around.

As cool as it seems, the Keecker just really feels like too much technology crammed into one thing and many of those things seem like afterthoughts if anything.  A mobile projector was the original goal of the Keecker and its original prototype was very true to this, basically a motorized scooter with a projector strapped to it.  Over time more and more technology was added to the unit that brought it to where it is today, a giant egg shaped robot that drives around your house to deliver entertainment to anyone in it’s way.  Cool? Yes.  Functional? Maybe not.

Another big factor that we’re considering is the price, although not yet released based off the Kickstarter reward pricing we’re guessing it’s somewhere between $2,000 and $2,500 which we unanimously decided was just too much to pay for a roomba projector.  But either way, it’s definitely blog worthy, and if a giant egg projector robot is something that you think your business or home could benefit from, check out their kickstarter page and even consider donating to the cause!

In our next blog we’re going to be covering the new HP Sprout, the worlds first projector/3d scanner/computer all integrated into one!