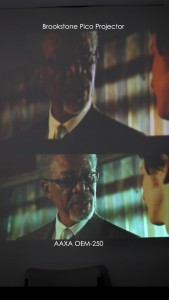 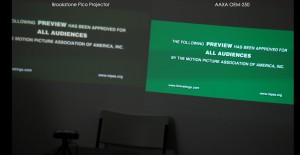 The Brookstone HDMI Pocket Projector has a sleek finish. It is smaller and more compact compared to the AAXA OEM250 weighing at half a pound vs the OEM250 at 1.4lbs. The Brookstone projector is about the size of an Apple TV, and it is a very clean look with minimal buttons. The trade-off for the sleek look is that it loses a bit of functionality due to the limited buttons. On the other hand the AAXA OEM250 is a bit larger, weighing at 1.4lbs, but still easy to take around with you. It comes with a nice on-board user interface and remote control. 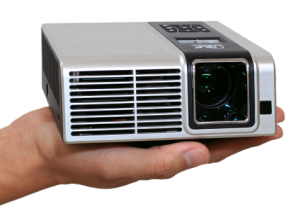 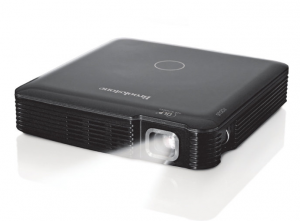 While the Brookstone HDMI is a great portable device, its size really limits a lot of function. In many ways the Brookstone HDMI is like a bare bone projector, providing only the essentials, which is what allows it to keep its compact size. It does not have an user interface, and the only way you can project images is through HDMI port. It also does not have the ability to play files directly from a USB or SD card, which is a big draw back for people who really just want to carry and project with the device. You can connect to a PS3, Blu-ray player, and a HDMI laptop. With an added adapter it will allow you to connect to non-Apple smart phones and tablets, and with the extra purchase from apple you can get an iPhone and iPad adapter as well. On the other hand, the OEM250 has an easy to use on-board user interface which also allows the device to play files directly from USB and SD cards. It can connect to everything the Brookstone projector can connect to, and it also can connect to non-HDMI laptops, and DVD players or other media devices using RCA cables through the A/V port. With all the extra features the AAXA OEM250 comes with a bigger size, but all in all both devices are still very portable and easy to carry around and project on the fly. 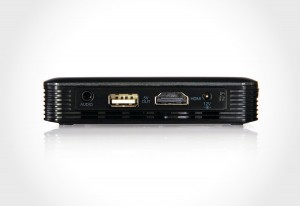 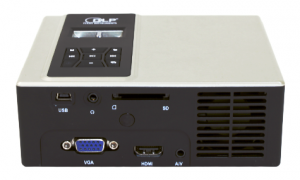 The performance of the two devices are quite different due to the much brighter 250 lumens of AAXA OEM250 vs the 85 lumens of Brookstone HDMI Pocket Projector. What the difference in lumens translate to is basically that the Brookstone HDMI projector cannot project a larger image and still keep the picture quality. When projecting at a 40″ image size, both projectors look about the same. However, the Brookstone reaches its limits at around 60″ when it starts loosing details and clarity, and the AAXA OEM250 can go up to 100″ in a dimly lit room or 120″ in a dark room before it looses picture quality and clarity. Below are a picture shot of the two performing projectors. My camera wasn’t able to fit both perfectly in one shot (since both were at about 80-100″ size.) The bottom brighter image is the AAXA OEM250 and the top is Brookstone HDMI projector.

If you are looking for a truly portable device that will let you project anywhere, the Brookstone HDMI Pocket projector is your choice because of the 2 hours battery life. This is great for presentations and on the fly media showing. However, if battery powered is not a main concern, then the AAXA OEM250 is definitely the better projector of the two. It has far better connectivity allowing you to play movies, TV shows, and games on the big screen through the computer, your smartphone, tablets, Blu-Ray and DVD players, USBs, and SD cards. The much higher brightness produces a better picture in various settings, ideal for powerful entertainment use. If you are a traveling road warrior type and cannot live without a portable battery, then the Brookstone HDMI Pocket Projector is your man.  But if you are looking for a projector for home and portable entertainment, then with the better price point, the AAXA OEM250 is the one to go with.