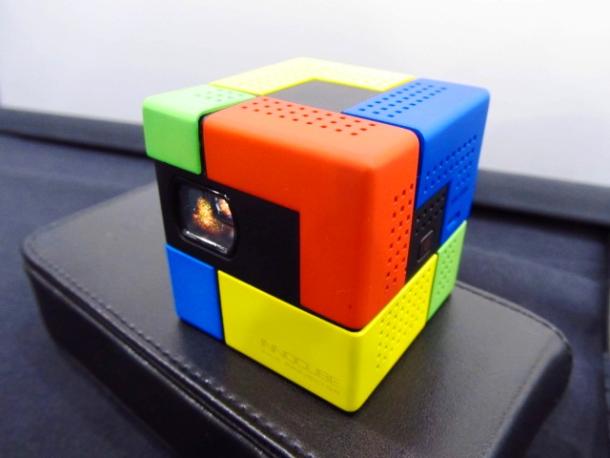 LAS VEGAS–For kids who aren’t into fairy tales printed on paper, Texas Instruments is showing off a gorgeously designed pico projector for videos at bedtime.

At CES 2013, TI demonstrated the Rubik’s Cube-style pico projector that works with DLP Pico technology.
Made by Innoio for Korea’s SK Telecom, the colorful cube can project kids’ shows or movies on a nearby wall or on the ceiling.
It apparently has a small speaker system, but TI staff on the floor of CES could not confirm that.
It’s available in South Korea but could come to the U.S. in the first quarter of 2013, according to TI’s Frank Moizio. It could be priced at under $200.
Acer intros new USB-powered pico projector for laptops
Vue pico projector: A Wowee product?
The projector resolution is WVGA (854 x 480), with an output of about 35 lumens. The unit has a Mini USB port to recieve HDMI MHL from cellphones and tablets.
You can get a roughly 50-inch image from three to four feet. It also has adjustable focus.
Now all you need is a good story.