Acer has recently introduced its new hybrid projector, the K750. Yeah, that’s right, a hybrid projector. The technology mates LED’s with lasers, producing a crisp 1080p picture. The laser part of the technology helps keep the picture in perfect sharpness, no matter how much you move it around.  Furthermore, the contrast ratio is at an outstanding 100,000:1; Acer claims the brightness, saturation and fidelity are all notably better than mercury lamps, which are in most projectors these days. Furthermore, the K750 has an instant on/off feature that will appeal to those maximizing their productivity throughout the day.

This technology is definitely a step in the right direction for projectors. It just has to get cheaper first to be appealing to the general public. Getting one of these in your hands will leave a sizeable dent, $2,650 to be exact, in your bank account. Many projector companies have dabbled in laser technology, including AAXA with its L1 laser projector. A hybrid technology that takes the best of both worlds is definitely an interesting concept; definitely worth keeping an eye out for in the near future. 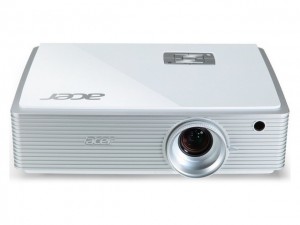