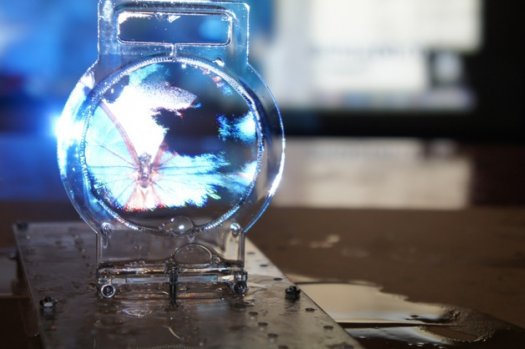 Tokyo, Japan –  Researchers at the University of Tokyo have developed a system that uses such bubbles as kind of projection screen based on colloidal liquids. The bubbles are made of a thin film, and allow light to create a reflection on one section before passing through other sections. Researchers found that if the reflection can be controlled, then the bubble can be used as a display.

At the core of the ingenuity at work here is the use of ultrasound to manipulate the way the surface of these bubbles work. The membrane screen is controlled using ultrasonic vibrations, which are played out of speakers and can change the membrane’s transparency and texture depending on the scale of the sound.

A device makes the membranes automatically. With the aid of the projector and ultrasonic speakers, the system alters the appearance of these membranes by controlling their color, transparency and BRDF (Bidirectional Reflectance Distribution Function).

Researchers  found that they can greatly improve  the quality of the projection by manipulating the ultra sonic waves, creating more realistic, distinctive, and vivid images on screen, the researchers said. “This system contributes to open up a new path for display engineering with sharp imageries, transparency, BRDF and flexibility,” said lead researcher Yoichi Ochiai.

The ingredients of the bubble the Japanese researchers have created include sugar, glycerin, soap, surfactant, water and milk. These result in a resistant colloid bubble that cannot be easily popped as even solid objects can pass through it without popping it. What’s more, by combining more than one screen, it is possible to create a kind of 3D or holographic effect.

The research team says the screen could be useful for visual artists but is not yet ready for commercial integration. We think this would make an excellent pairing with an equally small pico projector. AAXA? Optoma? 3M? Any takers?