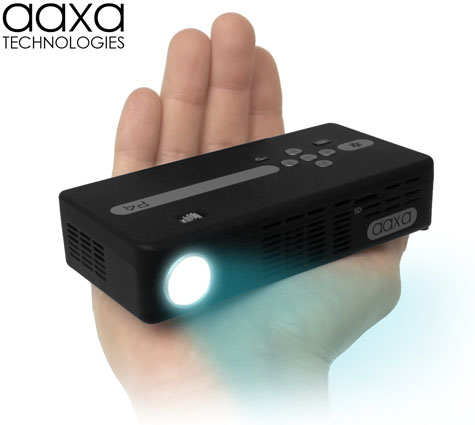 The guys at AAXA Technologies were kind enough to loan us one of the first few AAXA P4’s for review. At 80 lumens the P4 is supposed to be the brightest pico projector currently available. Made possible with DLP technology, the P4 is a departure from AAXA’s previous lineup which consisted of all LCOS projectors. Does this mean DLP is the choice for future pico projectors? More on this later.

The P4 employs 15,000 hour LEDs with AAXA’s “Vibrant Color” technology, which means tuned Red, Green, and Blue LEDs. In this case the unconfirmed rumor is the latest generation Osram LEDs but AAXA will not officially confirm this.

We were excited to test the P4 both for the title of “world’s brightest battery powered projector” but also because AAXA has managed to shoe-horn in the guts of a tablet into a pico projector! Running a 700mhz processor and Windows CE the AAXA P4 is supposed to be a truly unique LED projector. 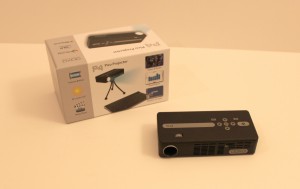 The box that the P4 came in is about the size of an Iphone box – the P4 itself is a little larger than an Iphone – about an inch longer and ½ inch wider and about 2.5x thicker. Not super small like some of the other pico projectors but definitely pocketable.
The P4 has all the bells and whistles you would expect from a mini projector – Micro SD Card slot, mini USB port, VGA input, composite video input, and of course a tablet processor that plays videos, pictures, music, and best of all Windows CE applications. Of course it also has a built in 75+ minute lithium ion battery pack – but in a single test we actually achieved 88 minutes of operating time. 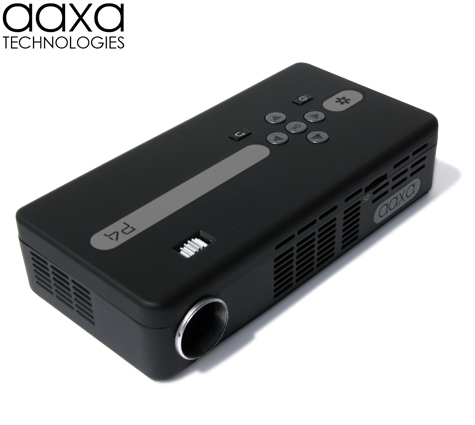 The appearance of the P4 is very industrial – no chrome, fancy color schemes, or eye-catching curves. It’s just a rectangle with some buttons and connections and is only available in one color – Black. The design screams “form follows function” although the soft-touch paint was quite literally a nice touch.
After charging the P4 for 4 hours we turned the device on. We were instantly greeted by the fan noise which sounded something like a BMX bike with playing cards in the spokes. Not impressed. However after about a minute of “warming up” the noise went away – the fan noise was… bearable… Fan noise aside, the image quality however was very impressive. Color quality is quite good and the image brightness was exactly what AAXA claims – the worlds brightest pico projector. 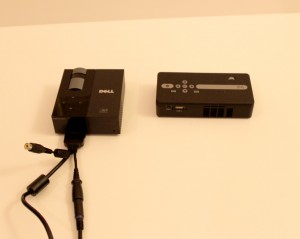 Since we don’t have a lumen measurement device we compared the AAXA P4 pico projector to the Dell M109S micro projector which is rated at 50 Lumens from Dell and is one of the first generation wall-powered micro projectors. The AAXA blew the Dell away in terms of brightness hands down. It was obviously 30 lumens brighter than the Dell. Where it got interesting was that AAXA claims the P4 achieves 60 lumens on battery power (compared to 80 lumens on DC power) but we didn’t notice a difference at all when we unplugged the P4 – it still was a lot brighter than the Dell M109S. What does this mean in real life terms? Well imagine a regular monitor size image in daylight, a big LCD TV in moderate lighting, and an image the size of a garage door (we’re not kidding look below) in the dark! Also the color quality of the P4 and the sharpness of the picture was better than the M109S. Take a look for yourself. 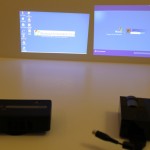 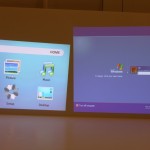 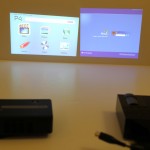 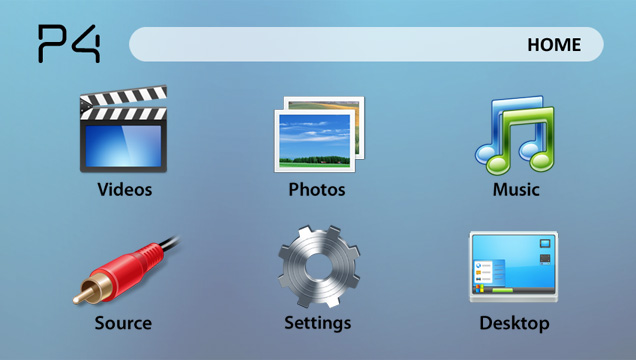 The AAXA P4 incorporates all the functions you would expect from a pico projector. It plays videos, pictures, and music off the SD card. We tried a few movie clips (full length movies) and they loaded up fairly quick and played well. The speaker volume was mediocre – not much better than the speaker phone of a cell phone. We suggest getting some external speakers if you’re trying to entertain more than a few people. The picture playback was a bit clumsy – there were no thumbnails, we couldn’t figure out how to stretch the picture. But the P4 read 3 and 5 megapix pictures fairly quickly.
The Windows CE “desktop” is where the P4 truly shines. When accessing the “Desktop” feature the P4 asks you to connect the wireless keyboard (optional $49 from AAXA).

You can also use any keyboard / mouse combo but the wireless keyboard from AAXA is rather slick. After connecting the keyboard the projector drops you straight into the Windows CE desktop – where you have a choice of selecting from a variety of different applications. This P4 came preloaded with a trial version of a Microsoft Office editor, which lets you edit spreadsheets, documents, and power point presentations all through the projector. Very impressive – its almost like having a mini computer that fits in your pocket! We haven’t had yet to load up some games but we will in the near future.

CONCLUSION
While the P4 is truly a huge leap forward for pico projectors, one must be reminded that as with most projectors LED Pico projectors are still designed to be used in low-light conditions. And with the lights off it truly shines – we’ll let the giant pictures on the garage door speak for themselves. Thanks again to the guys at AAXA Technologies Inc which let us have one of the first P4 Picos. The P4 Pico is currently retailing for $339 and can be purchased directly through AAXA’s website at www.aaxatech.com. 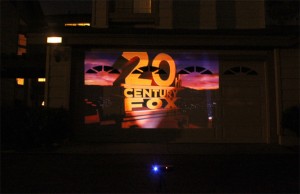 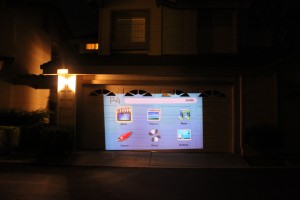 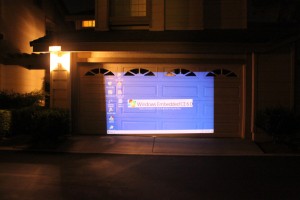