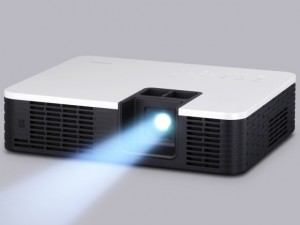 Casio announced a total of twelve new DLP projectors for the Japanese market, all of which can produce 3D images and feature a hybrid laser/LED light source. The company will start rolling out eight “standard” models starting in Japan in May, before offering two short-focus and two high-end devices in July.

The most interesting model is the flagship projector, the XJ-H1650, which features