LED projectors of the future will have little in common with their bulky counterparts today.  Not only will they be small and easy to use, but will also shine so brightly that the images appear sharp and clear, even in a sun-filled room.

Research scientists from Fraunhofer have created a small luminous cube made up of microscopically small nanostructured arrays of lenses that can record or project amazingly sharp images in brilliant colors.

The prototype of the new projector consists of an optical system just eleven millimeters square and three millimeters thick through which a powerful LED lamp shines. 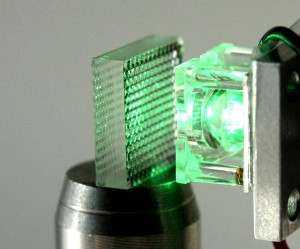 Quoting Marcel Sieler, physicist at the Fraunhofer Institute for Applied Optics and Precision Engineering IOF in Jena “The special thing about the new projection technology is that the image is already integrated in the microoptics. The pixels measuring just a hundred nanometers or so are stored in a chromium layer under the lens array. Such a microarray has around 250 microlenses, and under each lens there is a microimage. When all of them are projected onto the wall together, a high-quality complete image is produced from an extremely small projector”.