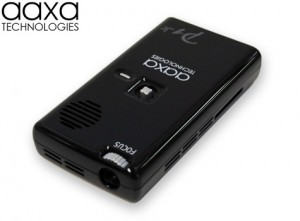 The AAXA P1jr LED projector is AAXA’s entry level LED projector. This LED projector features 10lumens at 640×480 resolution. There is an onboard PMP player which can read SD and USB memory sources. Additional external inputs can connect via the supplied RCA adapter or optional iPhone/iPod cable.

The most surprising feature of the P1jr LED projector is how bright it is given it is only 10lumens. The single white LED does surprisingly well in dim to dark environments. Given that it is a single white LED projector, colors like red and orange won’t be as vibrant, but at the price it is sold for, we would consider this an outperformer.

Enjoy some of the videos we found on the web regarding AAXA’s P1jr LED projector.